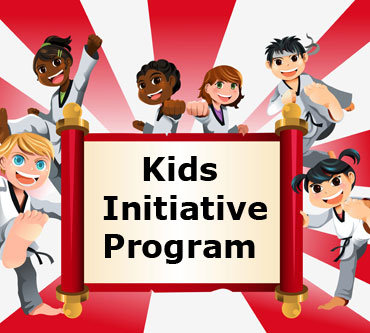 This program is available to children from the ages 5-13.

With an emphasis on mental and emotional discipline, the Kids Initiative class will consist of a single 40-minute class per week offered during the lunchtime breaks or as an after-school class.

A positive attitude is stressed. Students are instructed in the ethical behavior necessary for martial arts training such as respect for elders, respect for law and community, respect for property, courtesy, self-reliance, self-confidence and leadership.

Martial Paths will offer Karate and Jiu-Jitsu to the students, involving a robust exercise and stretching regimen, basic self-defense techniques and two-person drills. Kata (forms) from the Karate system will be taught and required to be learned and performed in-class and during belt tests.

We follow a traditional belt system denoting experiences in the martial arts. Starting with White, a student will progress to Yellow, Orange, Green, Blue, Brown and then Black. All Black belt applicants must be at least 16 years of age.

This curriculum has been sanctioned by the Snow Tigers Martial Arts Association, the Canadian Jiu-Jitsu Council and the Kai-Shin Karate Association. It has been taught to children in Eastern Ontario for over 44 years and Martial Paths is proud to carry on this tradition.